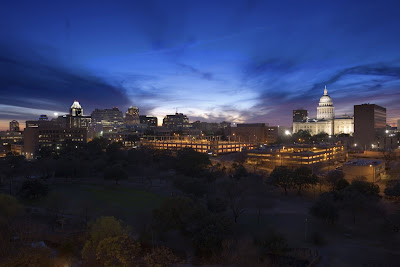 We moved to Austin on a Friday night. It was raining in Corpus Christi, so loading it took significantly longer than we expected, the battery on my wife’s minivan ran out, and rather than leaving around lunch, I eventually pulled out around 7pm.

On the road to Austin (Krista and the kids stayed an extra day at her parents), I got the U-haul stuck at a gas station where I struggled to get out with my Jeep on the tow-dolly. And, when your vehiclular baby is on the dolly (and oversized tires keep it from being properly secured), you drive the recommended speed posted on the vehicle – 55 mph.

I finally pulled into our new apartment community around midnight, where my baby brother waited in his car in southwest Austin. Brian Durr (whom I had never met, but had spoken to on the phone and via twitter) met us with the keys to my new apartment, and my brother and I spent the entire early hours of the morning unloading the U-haul. We finished right around 7AM.

We slept on the floor in the closets (because there were no windows in the closets) until I received a phone call telling me that we were blocking the drive w/ our oversized trailer, so we awoke at about 10:30AM to return the U-haul.

Krista and the kids met us at the apartment when we got back, and we had just enough time to unpack enough to go to church the next morning and send Micah to school for his first day.

Our first few days in Austin were chaotic and full. Looking back it only makes sense that our last few have been as well. Still, looking back at those first days only reminds me of the dizzying fullness we’ve experienced here.

It’s been a blast.