David Platt‘s first book, Radical, became a New York Times Bestseller. This month, the followup, Radical Together, released to similar acclaim. In it, Platt takes the ideas that he presented for believers in Radical, and adapts them to explore the potential impact if entire churches were to latch onto the same principles. 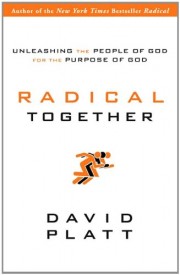 Churches can easily become distracted by doing good things that they miss out on God’s intended purposes. While these things are good in-and-of-themselves, they inhibit us from asking the question, “Is this the best use of time, money, and people? Is a new program, class, Bible Study, or Education Wing what the world needs most? Or is there another route we can take which enables us to best steward what God has given us that makes a greater global impact?”

We must be clear on the Gospel. One of the greatest critiques of Radical was the perception that Christians need to live incredibly sacrificial, generous lives to truly be Christians. I felt Platt did a good job clarifying that crucial point (salvation is by faith NOT by works), while still holding to a strong position that your works will testify to a changed heart.

The Word of God is sufficient. I felt that his critique of the modern church was a little harsh, though I’m learning that I agree with him on more counts than I’d like to admit. It’s the Word of God that changes hearts and lives and leads them to make disciples of the nations.