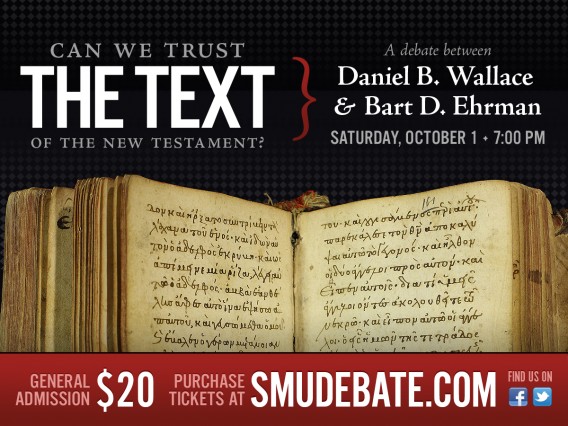 When I learned that Dr. Bart Ehrman and Dr. Daniel Wallace would be debating the reliability of the New Testament text back in mid-August, I immediately wanted to go. There was no question as to the weight of this matter or of the quality of those engaging in the debate. And thanks to the generosity of Dr. David Pitman, I was able to sit among the 1500 attendees to the debate.

You read that correctly. 1500 were in attendance on a Saturday night in Dallas to hear two great minds duke it out over the text of the New Testament. They originally booked a hall that would seat 300. They sold that out almost immediately and had to move to the largest auditorium on Southern Methodist University’s campus.

There is no doubt as to the importance and interest of this subject.

As he began his initial presentation, Dr. Bart Ehrman asked, “How many of you would consider yourselves Bible-believing Christians?” And upon seeing the vast majority of hands go in the air, he followed by asking, “How many of you just came out here to watch me get creamed?”

What followed was a winsomely delivered, passionate plea for the audience to consider the “problems” regarding the New Testament manuscripts.

Many of our copies (he preferred to use Mark’s Gospel as his primary example) came after the 4th Century. In fact, the vast majority of the manuscripts we have today originate from the 9th Century or more recent. He has little to no desire to credit the early copyists of the New Testament text with any sense of care or caution. He argues that the earliest copies we have (300 years after the original was penned) reveal that early copies were rushed and poorly edited. Only after the passing of time did the copyists (or scribes) give increased attention and caution to ensure the accuracy and precision of the text.

And he readily admits that the vast majority of all mistakes in the manuscripts are in regards to misspelled words, missing or repeated words, lines, and even at times, pages.

His argument from that data is that we simply cannot know what the original autographs said. Based upon shoddy copies by “barely literate” copyists, we simply can have little to no assurance regarding the New Testament’s reliability.

It was notable that Ehrman relied heavily on his personality and passionate plea for “an open mind,” and that Wallace relied heavily on texts. It appeared that every other sentence that he quoted has a footnote, often from a book written by or co-written by Ehrman himself! If Ehrman wanted to make this a passionate discourse, he would fail. Wallace was determined to sit at the big-boy table, citing sources and quoting scholars.

Wallace proceeded to argue that two extreme attitudes toward the New Testament’s reliability are beyond justification and offer little to no help in the conversation: absolute certainty and radical skepticism.

He accused Ehrman of radical skepticism, while himself claiming that we can be relatively confident in the trustworthiness of the New Testament texts.

He argues that the number of variants (between 300K – 400K according to the foremost scholars) are not the result of poor scribes, but of the number of copies we have! Of course there are variants, look at the mountain of manuscripts we have. And no other historical document can boast the mountain of copies as close to the original as any of the New Testament texts. We have three times more New Testament manuscripts within the first 200 years than the average Greco-Roman author has in 2000 years.

(Incoming Greek Nerd Alert)
Wallace then patiently explained that the vast majority of textual variants involve the “moveable nu.” That stands as proof in my humble opinion that even those who originally spoke Koine Greek couldn’t figure out it’s usage and all Greek students should get a pass in it’s use.

He followed by stating the second most common variant involved none other than the definite article. (Or since Greek does not utilize an “indefinite” article, it can just be called “the article.”) Again, that which gives first year Greek students fits apparently did the same to the original scribes of the New Testament texts.

He then answers the question that so many want to know: “What theological beliefs depend on disputed texts (that are the less than 1% of all textual variants that are both meaningful and viable)?

Ehrman is passionately unsure and skeptical in regards to the trustworthiness of the New Testament text. In fact, when asked what would be a credible enough source for him to believe, he responded with, “A first-generation copy within a week of the original penning of the New Testament book (or letter).”

That’s not too much to ask for is it?

Then again, I was reminded when I heard this that Abraham answered the rich man, stating, “If they do not hear Moses and the Prophets, neither will they be convinced if someone should rise from the dead.” (Luke 16:31)

Ehrman is thoroughly convinced that the earliest manuscripts we have of the New Testament text contain scribal prejudices and theological edits, though as a result of this certainty, we have no way in which to know what they are (or that they exist!).

On the other hand, Wallace admitted that while we don’t have any hard evidence, we have mountains of soft evidence. And while we cannot have absolute certainty (there simply isn’t any to be had), we have probability. And based upon the data, all of the probability leans toward the reliability of the New Testament text.