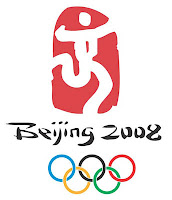 Like so many people around the globe, I have been so enamored by what’s going down in Beijing right now. Watching Team USA makes me just as excited and silly as it did when I was a kid.

I was awake late enough last night to watch the men’s 4×100 relay which was scary amazing! I’m sitting in a hotel room watching the men’s gymnastic team do some incredible stuff. Of course, I’m on Phelps watch like all Americans, and I looove rooting for our men and women representing us over there.

I’m not suggesting that we stop rooting for the Stars and Stripes, but instead, that as the flag is raised and the anthem played, be sure to pause long enough to remember that the God that we serve loves and cares for all of these other nations. And, of all people, God calls us to share that love with them.

Challenge – Who or what do you treasure and value to the extent that it hinders your opportunity to share Christ with others? Answer that question and then go do something about it.