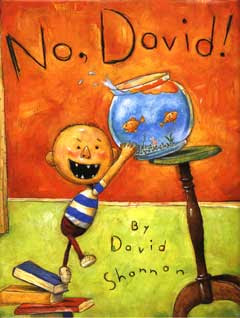 What really bothers me about mistakes is not that I fail, but that it usually affects others around me. It wouldn’t bother me to totally screw up and bear the weight on my shoulders. The pain – the hurt – comes when I realize that it’s influenced, affected, and hurt those that I love.

I had this thought yesterday when I was challenged by someone about a post that I had written. They were offended. It would be one thing if they were some anonymous person in the interwebs that searches for things to gripe about. But this was someone whose relationship I treasure. Needless to say, I deleted the post.

All of my kids have had this book. “No, David.” by David Shannon. As I was thinking through this thought, it kept bringing me back to this book. It’s really just about a mischievous kid who manages to do everything wrong, and his mother is constantly saying, “no, David!” The end of the book is simply the mother taking David in her arms and exclaiming “I love you, David.”

I wonder how many times people in my life (perhaps especially my mother) have grown weary of correcting me due to my repeated mistakes to see that I need that affirmation of relationship.

That thought led to a really strong moment for me when I realized two things. First, there is no such thing as a victimless sin. King David confessed to God, “Against you only have I sinned.” Every sin affects and hurts God, our heavenly Father. Without our sin, that effectively strains our relationship to Him, the cross would not have been necessary.

Over the next week or so, I’ll share some of those encouragements where God has clarified something to me. Most of the time, these are areas that I intellectually agreed with, but practically ignored.